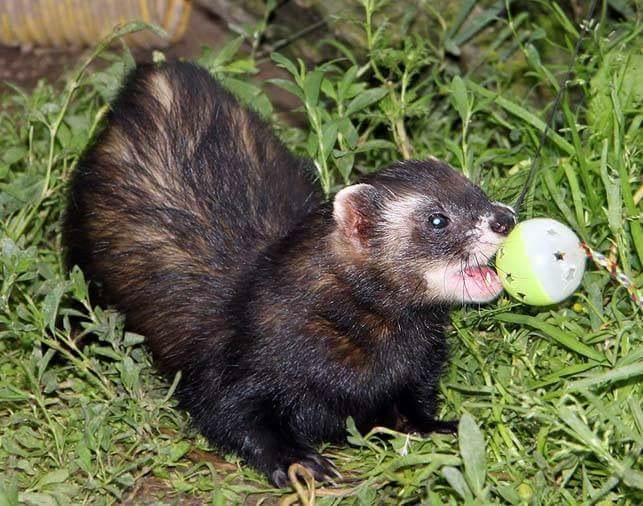 Games you can play with your ferret

Ferrets are no strangers to making their own entertainment, and when they are in the mood to get rowdy, can literally make a game out of anything! Ferrets also very much enjoy challenging games and interactive play with you, and keeping your ferret active and their minds occupied are essential to ensuring that your ferrets are happy and healthy. It is not hard to encourage your ferret to play chase, catch or other games, and once your ferret understands what is involved in the game, will get into it enthusiastically! Don’t be surprised to see your ferret blatantly cheating either, these wily creature’s intelligence is only matched by their complete lack of regard for fair play!

So, if you want to have fun and play with your ferret, what types of games do they enjoy? Read on for ten great suggestions!

Ferrets are fast moving, energetic little animals, and when they get their speed up, they will zoom around the room in a blur! Any games that involve chasing back and forth are popular with ferrets, so teach your ferret to play playground tag!

Encourage your ferret to chase you around, and when they catch you or tag you, turn around and chase after them! When you “tag” them back, it’s turnabout, and your ferret once again comes after you, until you are both exhausted!

Ferrets love to dig and to explore underground, and you can give your ferret plenty of entertainment by setting them a digging, toy-finding challenge! Fill up a medium to large cardboard box with neutral material such as shredded paper or packing peanuts, and hide some of your ferret’s favourite toys and treats in the box. Your ferret will have plenty of fun rooting through the box and trying to find all of the goodies that you have hidden for them!

Cat toys such as a feather or ball on a string held by a stick can provide hours of fun for ferrets, whose prey drive will kick in and enable their hunting instincts! Get your ferret’s attention by trailing the toy along the floor, then lift it up out of their reach and watch while they try to catch it!

Ferrets are both intelligent and tenacious, and a game that challenges them mentally as well as physically will be well received! You can buy a ready-made maze kit for small animals, or make your own with a selection of tubes, boxes and other obstacles. Hide treats in the maze, and time your ferret’s journey through it, changing things up sometimes by altering the layout of the maze!

Invest in a very cheap (so it does not matter if it becomes damaged!) remote control toy, such as a child’s toy car. Find a hard surface such as wood flooring or tiles, and pilot the car around your ferret! Your ferret will chase it until they catch it, and you can also turn it into a game of tag and use the car to chase your ferret in return!

Use a very small, lightweight cushion that will not be too heavy or hard for your ferret, and use it to instigate a pillow fight! Gently drop the pillow onto your ferret and retrieve it, and then enjoy the game as your ferret tries to take the cushion from you and fight back!

If you have a trampoline in your garden or a small exercise trampoline in the house, your ferret is sure to find this as much fun as any kid will! Place your ferret in the middle of the trampoline and gently push it so that your ferret feels it bounce, and wait for them to take over, bouncing around with abandon! If your trampoline is high off the floor, take care to supervise your ferret at all times to make sure that they do not fall off the edge and potentially hurt themselves.

If you have something that your ferret wants, they will not be shy to try and take it from you! Get your ferret involved in a tug of war with a rope dog toy, or even an old tea towel! Prepare to surrender the toy to your ferret when you are finished, and take care to ensure that those sharp teeth do not grab on too close to your fingers!

Ferrets are bright little animals that can soon pick up the rules of games like catch and fetch- but whether they decide to play by the rules is up to them! Throw a small ball for your ferret to chase, and encourage them to bring it back to you so that you can throw it again.

If you own ferrets, you are no doubt already familiar with the ferret “dooking war dance,” which they use to display excitement and lots of energy! You can actually join in with this, which will likely greatly entertain your ferrets, and possibly even incite them to play by starting off the dance! Just make sure your neighbours aren’t watching and potentially uploading it to Youtube when you do it...