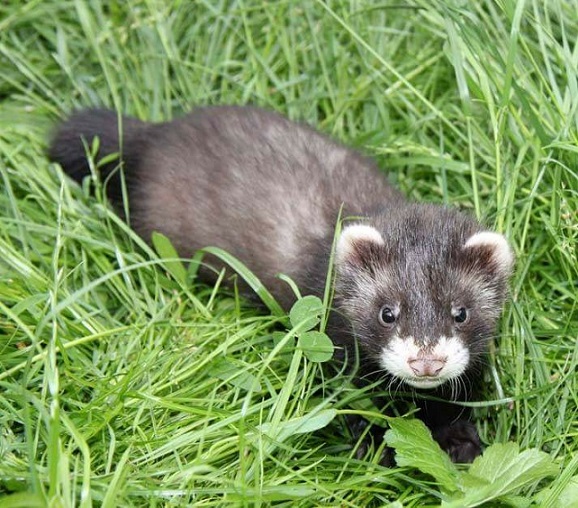 Here you can read the general info about ferrets, diseases not included.

Lots of people keep ferrets as house pets which is hardly surprising because they are such fun little animals to have around. They are the ideal pet for people who have nine to five jobs too because these furry little friends sleep most of the day and wake up in the evening when they get very lively indeed, keeping their owners busy and entertained for hours.

Below are a lot of useful facts about ferrets which will come in handy if you are thinking about sharing your home with one or two of these highly amusing and fun creatures.

Sharing your home with a ferret is a long-term commitment because they boast long lifespans and if well cared for they can live anything from 5 to 10 years, sometimes even longer!

Ferrets grow up very quickly and generally reach sexual maturity when they are anything from 4 to 8 months old.

Female ferrets tend to be quite a bit smaller than their male counterparts and they weigh in at anything from 0.75 to 1.5 kg which is 1.5 to 3 lbs. When it comes to length, females can be 45 cm long which is around 18 inches – including their tails! Females are called "Jills" when they have not been spayed but when they are spayed, they are referred to as "Sprites".

The gestation period for females is relatively short being just 42 days and the average litter size tends to be 8 babies. However, there are reports of ferrets having anything from 1 to 18 babies in a single litter! Babies need to be weaned from their mother when they are 6 to 8 weeks old.

Male ferrets are larger and heavier than their female counterparts weighing in at anything from 1.5 to 2.5 kg which is 3 to 5 lbs. When it comes to length, males can get as long as 60cm which is 24 inches in length including their tales. Males that have not been neutered are called "Hobs" whereas neutered boys are referred to as "Gibs".

Baby ferrets under the age of a year are called "Kits" and a group of ferrets are known as a "business of ferrets".

All baby ferrets exept blackself/solid are born pink with white fluff. They only start developing their true colour when they reach 3 weeks old. Babies are born with their eyes closed, exactly like kittens and they only start to open their eyes when they are about 34 days old.

Kits are born with fluff all over their bodies and they are tiny, about the size of a lipstick weighing in at a mere 6 to 12 grams. They start feeding off mum as soon as they are born and should gain anything from 2.5 to 3 grams every day for the first week of their lives, doubling their body weight by day five. Mum cleans their backsides for them for the first few weeks of their lives which encourages the kits to do their toilet.

Their normal heart rate is anything from 200 to 250 beats a minute.

It is a matter of personal choice as to whether you should get a female or male ferret. Both require the same amount of looking after, love and care. However, as previously mentioned, male ferrets tend to be that much larger than their female counterparts often reaching twice the size. The one thing you need to do however, is have your pets spayed and neutered as soon as it is safe to do so otherwise it could lead to unwanted litters as well as some rather nasty health conditions including Aplastic Anaemia, which more often than not proves fatal. Chemically neuter your ferret with a suprelorin chip is a great alternative for surgery. The chip last about 1-5 years and the cost is the same for both jill and hob

It costs slightly more to have a female spayed because the operation is that much more complicated. However, both neutered and spayed ferrets have a less strong smell about them with one of the reasons being they end up far less territorial.

When it comes to behaviour, both females and males are very alike although it has to be said that each ferret boasts its own very unique personality. How they were raised plays a big part in how they turn out too. If you cannot make up your mind whether to get a male or female ferret, you should consider getting both, making sure they are spayed and neutered at the right age to ensure you don't end up with unwanted baby ferrets!

This article is really good, it's filled with lots of useful information! To make it a bit easier to read you could bold the subheads, if you want